“Well, we might as well highlight the whole page,” says one student philosophically, realizing he knew how to read and understand nearly all the Hebrew words in the מַה נִֹשְתָנָה (Four Questions asked on Passover) for the first time! 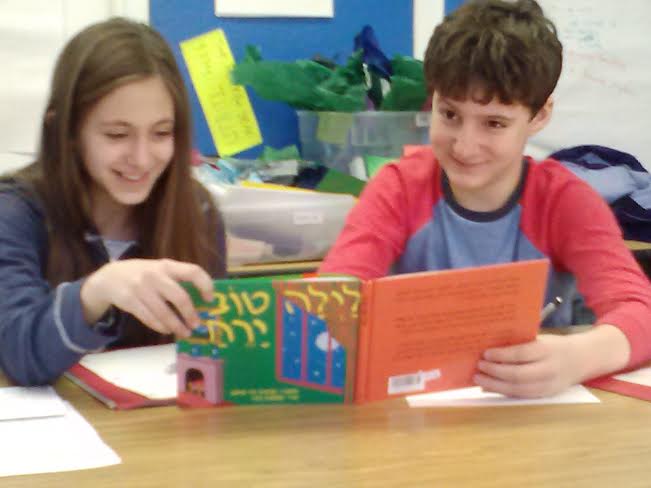 For several weeks this spring, students have listened to Hebrew children’s stories, conducted an in-depth study of  לַילָה טוֹב יָרֵחַ (Goodnight Moon) and begun to craft original short stories with the vocabulary and grammar they have learned in our JJP Hebrew Through Children’s Storybooks course.  Every session has pushed the students incrementally farther in their understanding of the Hebrew language leading up to today’s spontaneous revelation.


We were reading a pattern story about a boy’s discoveries on the road to visit his grandmother.  The end of each page posed the question: ?מַה מָצְאוּ בַּדֶרֶךְ (What did they find on the path)?

All of a sudden we heard sounds of “popcorn” popping all over the room.
“Wait…!!!”
“I’ve heard that word before!!!”
“Is it anything like Manishtana?”

Exactly right!  This is the moment we had been building toward all semester!

To emphasize to students the depth of their knowledge, we wrote the words of the Ma Nishtana on chart paper.  This is a song the students had been practicing for weeks in preparation for Passover.  They could read it, sing it and even explain its main themes.  However, it was clear after a few moments that they had not yet discovered how many of the Hebrew words they could actually understand on their own, by virtue of their studies in modern Hebrew literature.

So we created a challenge:
The students were tasked with highlighting each word they could READ AND UNDERSTAND in the text (not words they kinda, sorta, like, almost got the gist of).  Then they got to work. 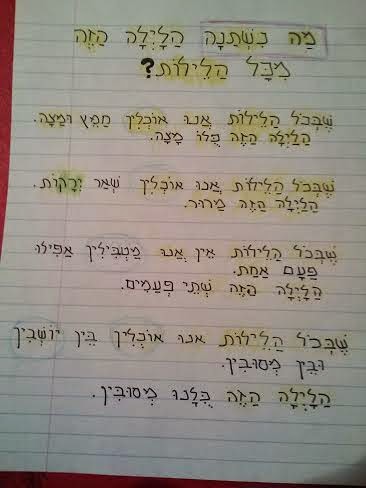 Word by word, students discussed whether they heard it before and what they thought it meant.  Several times, they delved into their personal dictionaries to confirm the meaning of a word they had learned in another context.  They identified prefixes, plural word endings and verb roots, applying many of the language strategies we have been practicing.

All the while, there was such excitement and pride on their faces!

Many were truly amazed by their own ability to read and understand the familiar yet still foreign Hebrew text.  We were so immersed in our discoveries that I forgot to take photos of the learning in action!  But you can see the final highlighted product on the left.

At the end of the class, students shared several observations about their own learning.  One student commented, “When I see Hebrew, now I try to read it… more than I did before.”  Another student added that he is “not so afraid to speak Hebrew now because I didn’t think I could do it before.” See the following journal entries for further reflections.

There is a midway point in every course where the tenor of our studies changes.
Several things happen at once:

When, like today, the students begin to see real meaning in the prayers they encounter in their religious and family lives... these are the transformative “aha” moments that both students and teachers will treasure for a lifetime.

Amy Fechter
Amy Fechter is a "learning strategist" who takes lessons from her own experiences in attempt to make other people's lives just a little bit easier. As the founder of Strategic Hebrew, Inc., Amy is pioneering the use of engaging language encounters to build problem solving skills (see blog: "Strategic Hebrew"). Her blog "Processing Jewish Mourning" offers tips to mourners, clergy and friends about the Jewish mourning experience. The upcoming "Good Friend's Guide to a Jewish Wedding" will offer tips and hacks for friends of the happy couple who want to contribute to their happiness leading up to the wedding and on the day itself.